What is a Net Promoter Score?

What is NPS (Net Promoter Score)?

In many cases, the easiest way to differentiate between sales and marketing is whether you can measure it or not.  After all, sales are easy to measure.  But marketing and communication can be measured too.  With marketing, you aren’t measuring it in sales generated however.  Instead, you are measuring instead the effectiveness of conveying a message, or the impression of a brand, product or service.

One way generally accepted method is Net Promoter Score, or NPS.  According to the Harvard Business Review, “Research shows that, in most cases, there is a strong correlation between a company’s growth rate and the percentage of its customers who are “promoters”– that is, those who say they are extremely likely to recommend the company to a friend or colleague.”  (Source: https://hbr.org/2003/12/the-one-number-you-need-to-grow/ar/1).  This is the article that positioned the NPS as the most important number a company needs to grow.

For example, if you look at the downfall of AOL as a service, it’s because they didn’t pay attention to the detractors.  Sure, they grew like crazy for a while because their promoters outweighed their detractors, but as that ratio fell, so did their business.

Here’s a write up from a NPS vendor, Medallia, that explains it well.

Customers are surveyed on one single question. They are asked to rate on an 11-point scale the likelihood of recommending the company or brand to a friend or colleague. Yes, that’s 11-point, not 10.

“On a scale of 0 to 10, how likely are you to recommend this company’s product or service to a friend or a colleague?”

Based on their rating, customers are then classified in 3 categories: detractors, passives and promoters.

DETRACTORS: ‘Detractors’ gave a score lower or equal to 6. They are not particularly thrilled by the product or the service. They, with all likelihood, won’t purchase again from the company, could potentially damage the company’s reputation through negative word of mouth.

PASSIVES: ‘Passives’ gave a score of 7 or 8. They are somewhat satisfied but could easily switch to a competitor’s offering if given the opportunity. They probably wouldn’t spread any negative word-of-mouth, but are not enthusiastic enough about your products or services to actually promote them. 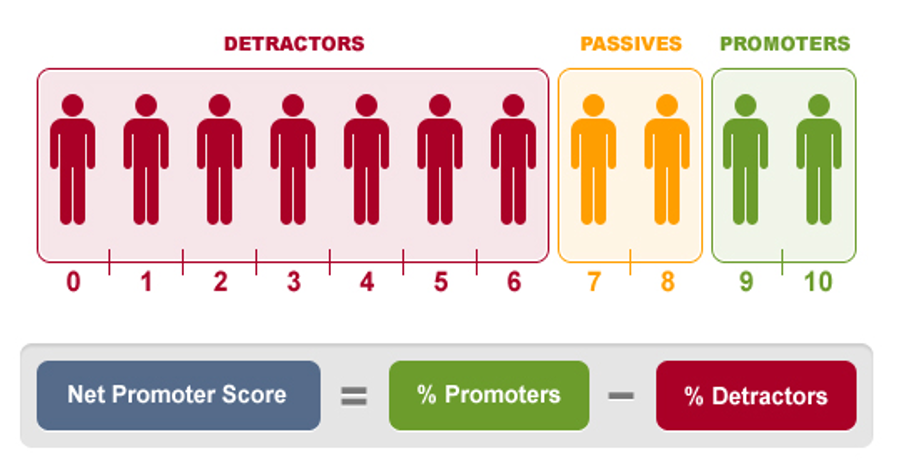 How to read a Net Promoter Score?

The basic construct of a Net Promoter Score is easy to understand, hence its popularity and widespread usage. If a company has more detractors than promoters the score will be negative and vice versa. A Net Promoter Score provides companies with a simple and straightforward metric that can be shared with their front line employees. The Net Promoter Score is helpful in that it can be used as motivation for employees to improve and to provide the best customer experience possible. The ultimate objective here is to convert customers who were less than happy or unimpressed into promoters who will put the word out and allow for increased revenues and profits.

The best case scenario is when you can shift people from Detractors to Promoters — as Passives are likely to neither harm nor help you.  NPS scores rarely exist outside the -50 to 50 range.  An NPS of 25 is often consider quite good, and above average.  But, what’s more important than any particular score is the tracking and comparison of multiple NPS scores — the trend, and measuring what you are trying to do.